One of our grade 12 students, Faris Alyousef was recently accepted to study at Harvard University. 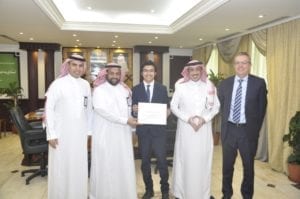 One of our grade 12 students, Faris Alyousef, who has been a student of Rowad Al Khaleej International School, Dammam since 2011 was recently accepted to study at Harvard University and also got a 1580 score (out of a possible 1600) for his SAT. This is the highest SAT score ever achieved by a student in Saudi Arabia.

On the 2nd January Faris, along with Alan Hood, the director and Eyada Alenezi, the Principal of the school were invited to meet Dr Nasser Alshalaan, Director of Education, Eastern Province and Awadh Almalki at the Ministry. They presented Faris with a certificate and plaque in recognition of his fantastic achievements.